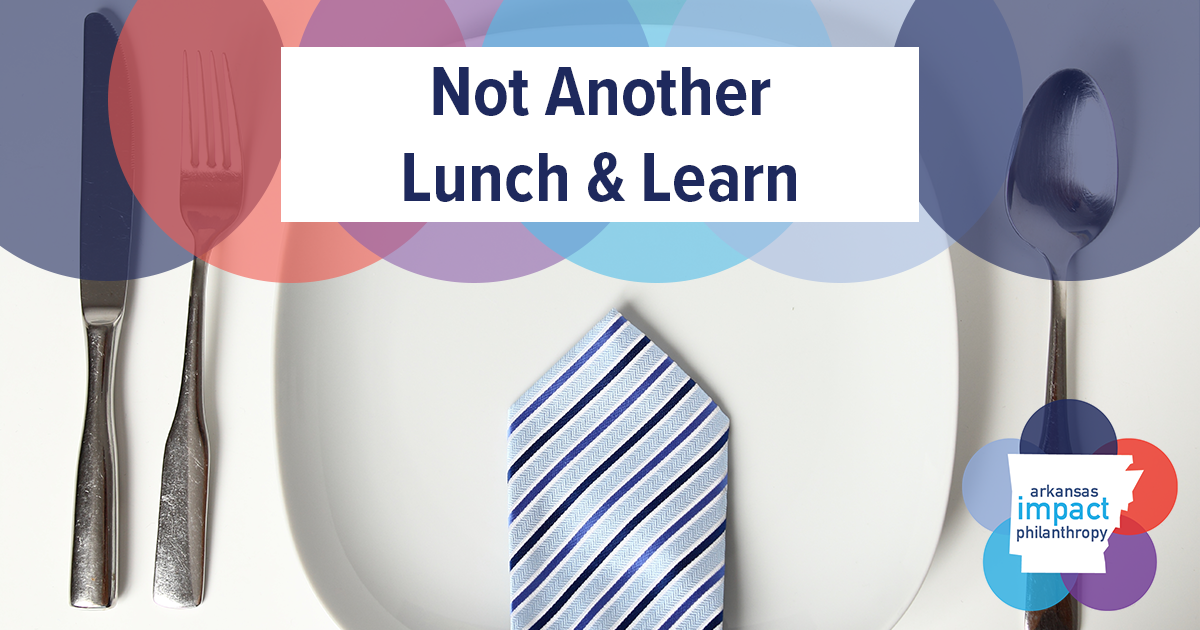 As I pulled the plastic wrap off my soggy vegetarian sandwich, my third in as many days, the thought crossed my mind, “What are we getting done here?”

Another report-out from a beleaguered nonprofit leader working to address a persistent challenge in Arkansas—maybe it was low educational attainment or poor health outcomes. Another chance to say hello and renew acquaintances with colleagues. I looked around to see other polite smiles and nods from other Arkansas funders all around me, and I realized I’d heard all this before. I’d learned all this before. I knew everyone in the room. Heck, I’d even eaten this same boxed lunch at least 20 times in the past three months.

Something needed to change. And all the polite smiling and nodding by people I had worked closely with for years told me Arkansas funders were ready to take philanthropic collaboration to the next level. It was time to craft a shared vision for what could happen in Arkansas and take a coordinated approach as funders to unlock Arkansas’s full potential. I didn’t have a name for it in that moment, but we were ready for what would become Arkansas Impact Philanthropy (AIP).

After that lunch—the one that felt like the movie “Groundhog Day”—I called a colleague at another Arkansas foundation who had been there with me, someone who had been politely smiling, nodding, and looking around the room to gauge whether anyone was learning and networking. We said it almost simultaneously: “Something needs to change.”

Don’t get me wrong. We were grateful to philanthropic leaders who had set the table for collaboration through the Arkansas Grantmakers Association, which later became the Arkansas Philanthropy Roundtable. The social and professional relationships that were formed over those boxed lunches were a necessary appetizer, so to speak. But the moment felt ripe for something more. Arkansas grantmakers were getting ready to bite off a slightly bigger mission.

My colleague and I made more calls. We both had eerily similar conversations. Funders across Arkansas and a handful of national funders who made grants in our state kept saying, “I don’t want to have one more lunch until we can clearly identify what we’re going to make happen together and do it.”

Our first step was to figure out what would be our “what.” In fall 2016 Arkansas Community Foundation, Carl B. and Florence E. King Foundation, the Clinton Foundation, the Council on Foundations, Philanthropy Southwest, the Southeastern Council of Foundations, and the Winthrop Rockefeller Foundation hosted the Bold Ideas Gathering (BIG) in Little Rock. We explored the power philanthropy could have in Arkansas, locally-driven solutions, and how we could partner to drive progress. And we acknowledged that none of us had enough dollars at our disposal to address all of Arkansas’s needs independently. If we wanted to go far, we would have to go together.

Yes, we had lunch, but BIG also lit a fire in us. Funders were ready to move Arkansas forward, and after ongoing conversations we chose to call this re-imagination of funder collaboration “Arkansas Impact Philanthropy.”

With a name and a commitment from a handful of local and national funders to attend, yes, a few more meetings, our next task was to figure out where to start. We agreed in theory that collaboration was necessary, but we were far from certain about what collaboration would look like in real life. Many philanthropic professionals say once you’ve met a funder, you’ve met one funder. That was certainly true for AIP partners. We represented funders from multi-billion dollar national foundations, corporate foundations, and small family foundations. Our geographic focus areas, mission statements, and grantmaking budgets continued to be all over the place. Although we wanted to move mountains, we knew we could only move the mountain in front of us one rock at a time.

We needed more information to figure out just where to start. We knew that the one thing our vastly different organizations had in common was a commitment to make life better for people in Arkansas. So we funded research that revealed the greatest opportunities to make progress toward economic opportunity and prosperity for all Arkansans. And we began to study equity to ensure that our future work together would support and increase access to resources and opportunity for people of all backgrounds and identities.

We learned that a disproportionate share of philanthropic investment in Arkansas—particularly the kind that is intended to create lasting economic change—was concentrated in only a handful of counties. We saw that national funders were providing significantly more support for advocacy and leadership development in Arkansas than local funders were. These findings forced us to ask why and to think about what we could do about it, together. The process was slow, but finally we arrived at a goal for our work together: Get more resources to support marginalized communities based on the desires and aspirations of residents in those communities.

Now, I can clearly see opportunities for us to catalyze change in communities. Are our immediate next steps crystal clear yet? Certainly not. However, I feel optimistic for Arkansas because funders have been willing to give their time to figure this stuff out, and my colleagues believe something better is possible. Funders have also looked beyond their usual approaches to the work to support the collaborative because they know it is the right thing to do, and we have a collective power to get what needs to happen done. Arkansas philanthropic leaders have demonstrated true bravery by embracing untested ideas and acting together.

I have learned and networked with funders for years, and now I see that all those lunch and learns were laying the foundation for true philanthropic collaboration through AIP. We’re making it happen . . . one boxed lunch at a time.

Sarah Kinser is chief program officer for Arkansas Community Foundation. In this role, she oversees the Foundation’s grantmaking, affiliate system,  investing, and community partnerships. She holds a bachelor’s degree in English from Lambuth University in Jackson, Tenn., and a master’s degree in professional and technical writing from UA Little Rock. She earned the Accredited in Public Relations (APR) credential in 2012. Previously, she worked on the staff of the Arkansas Literary Festival and as a composition instructor at UA Little Rock.